NOLA Is Hot, But Our Festivals Are Hotter 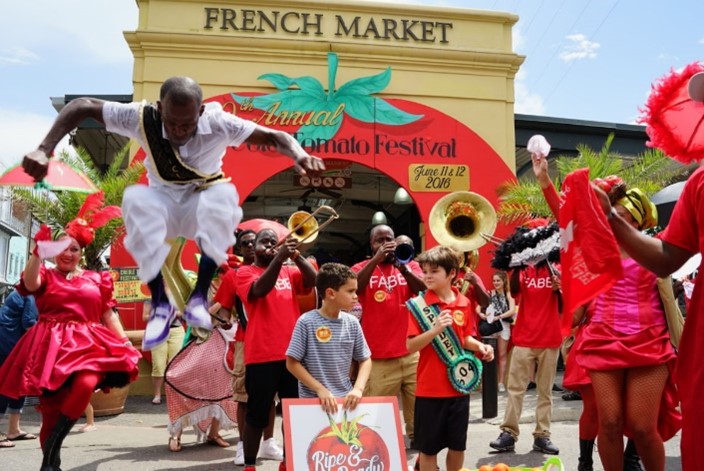 Hey everyone! I hope you all are finishing out the school year strong. Last week, we wrapped up finals here at Tulane so our students are looking forward to a relaxing, fun summer. While summertime is hot here in New Orleans, we have plenty of exciting festivals to distract you from the heat.

Read on to learn about some of our ~hottest~ summer festivals! 🔥 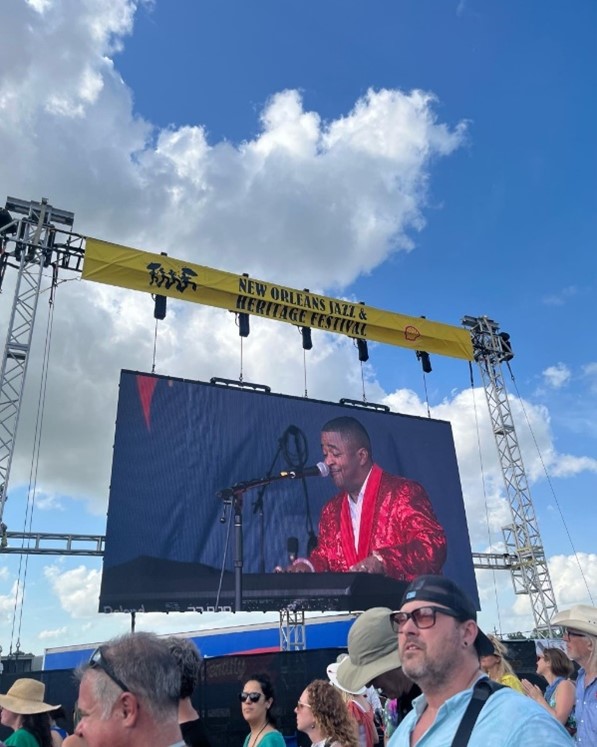 A picture of one of the big screens at Jazz Fest, taken by Executive Director, Leila.

I know this one is already over, but as one of the biggest celebrations in New Orleans it is definitely worth a mention! Held at the Fairgrounds Race Course, Jazz Fest celebrates local music and culture of New Orleans, the birthplace of jazz. With 12 stages, Jazz Fest features artists in multiple genres including jazz, gospel, Cajun, zydeco, blues, R&B, rock, funk, African, Latin, Caribbean and folk. Some notable mentions who performed at this year’s Jazz Fest are The Who, Stevie Nicks, Jimmy Buffett, Willie Nelson, and Erykah Badu. Look out for next year’s Jazz Fest starting on April 28, 2023!

A brass band playing outside of the French Market during Creole Tomato Festival.

This year will be the 36th annual Creole Tomato Festival where visitors can hear live music and test out Creole tomato dishes! This festival takes place at the French Market where you can peruse food and clothing vendors, shop for sweets and home goods, and explore art galleries. Besides listening to music and eating food, you can also compete in the Creole Tomato Eating Contest and experience a cooking demonstration held at the Louisiana Cookin’ Culinary Stage. 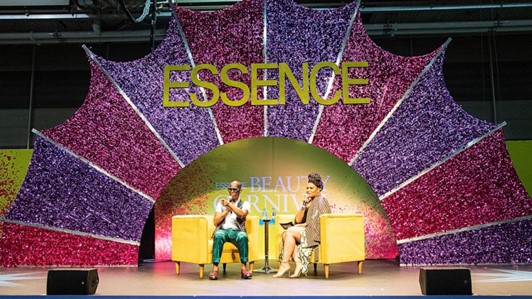 As the largest festival in the country with over 530,000 attendees annually, the ESSENCE Festival of Culture works to bring together generations of Black women to promote sisterhood, personal development, wealth creation, civic engagement, and community leadership. This year, ESSENCE Fest will feature performances from Kevin Hart, Nicki Minaj, Janet Jackson, and New Edition. Beyond performances, ESSENCE Fest includes experiences like the Beauty Carnival, featuring big brands, influencers, and beauty experts, and a Wellness House, which promotes self-care, health, and wellness. 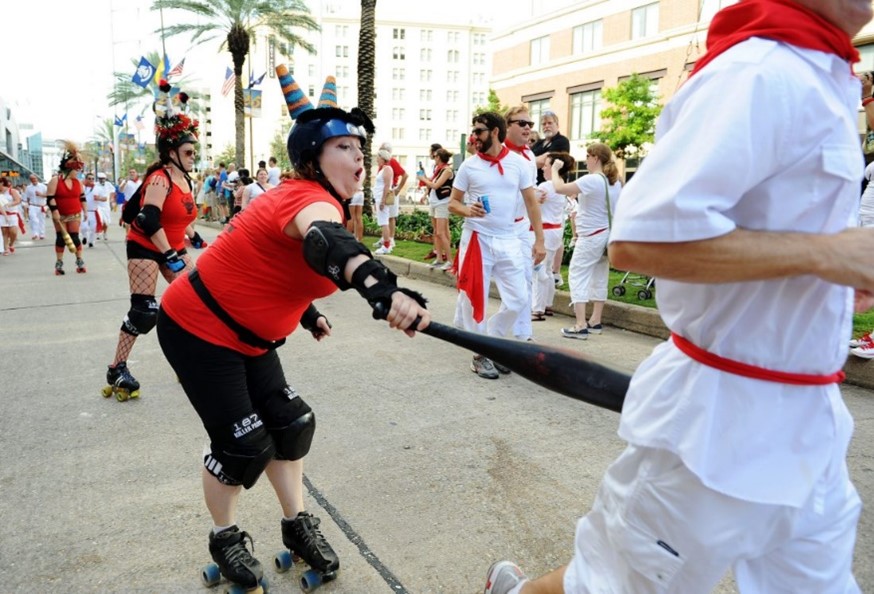 Inspired by Spain’s Encierro de Pamplona, New Orleans’ Running of the Bulls is a charity run which benefits local organizations. But, we’ve put our own spin on things here. Instead of bulls, this festival features roller derby skaters wearing horned helmets and sporting plastic bats, which they use to whack participants. While this is the main event, the festival also features an opening night event hosted by one of the charities, live music, and food. 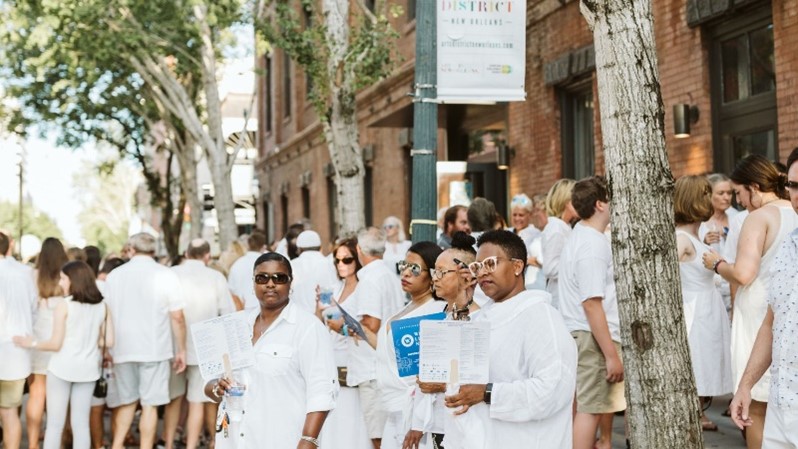 Hosted throughout the Arts/Warehouse District of New Orleans, White Linen Night celebrates the continually growing arts scene in the city and benefits the Contemporary Arts Center. Over 20 galleries participate in this night of performances and exhibitions, gallery showings, and parties. White Linen Night is totally free and open to the public so stop by if you’re in town early August! 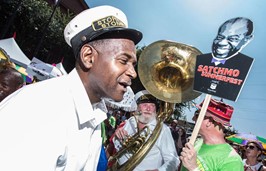 A shot of musicians at Satchmo SummerFest.

If you love Jazz music, then this festival is for you! Held at the New Orleans Jazz Museum, Satchmo SummerFest celebrates the life, legacy, and music of Louis “Satchmo” Armstrong, a New Orleans native. The festival not only features live music, but also New Orleans cuisine and lectures about Armstrong. 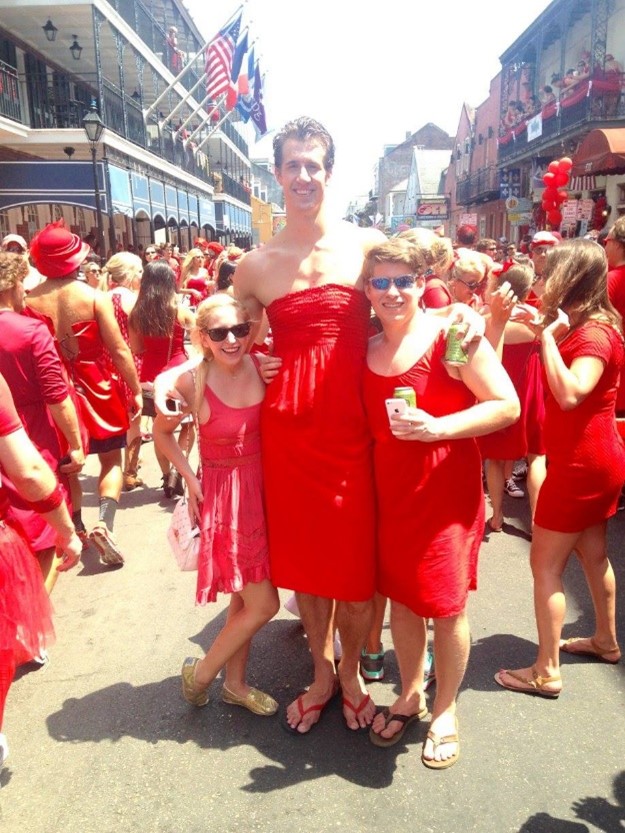 Our TX regional counselor, Julie, sporting her most fashionable red attire at Red Dress Run. (Fun Fact: the man in the middle is Julie’s friend from Tulane who is a 7 ft basketball player from Prague!)

Hosted by the New Orleans Hash House Harriers, Red Dress Run is a charity “run” that goes through the Marigny/Bywater and French Quarter neighborhoods of New Orleans. The run ends on Bourbon Street where runners and spectators enjoy lunch and live music. Red dresses are a requirement!! 💃

A shot of Southern Decadence from a French Quarter balcony.

To celebrate the LGBTQIA+ community in New Orleans, this festival, held every year on Labor Day Weekend, includes parties, parades, brunches, and other events! This festival began back in 1972 as a street festival between a group of friends who called themselves the “Decadents.” Now, the festival is a weekend long and spans a number of neighborhoods in New Orleans including the French Quarter, Marigny, and Lower Garden District.